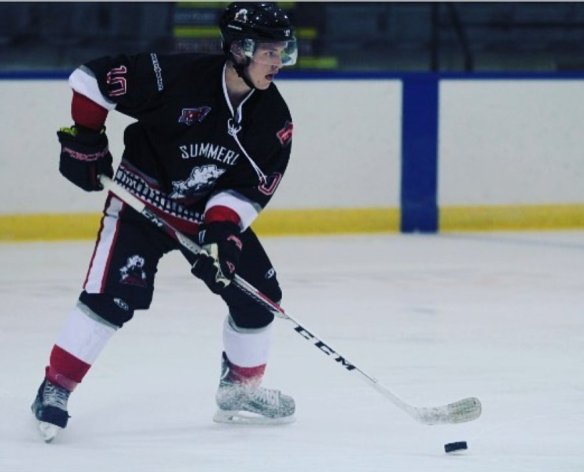 Often times, the first games in the month of January league wide in the KIJHL can surprise you. Teams are just getting back together, getting back into the swing of things and re-establishing routine, and sometimes it can make for a little bit of sloppy hockey. That was exactly what we got this past weekend at the Summerland Arena, as the Summerland Steam came away with a loss and a tie out of a pair of games against Doug Birks Division opponents.

On Friday night, their first game after the KIJHL Showcase, the Steam faced off against the Kamloops Storm. They arrived with purpose, and were very good in the first five minutes despite not being able to beat Storm goalie Ethan Paulin-Hatch. They had several good looks, including a post hit by Ty Banser that couldn’t quite find the back of the net, but it was Kamloops that would take the edge in the first period. The visitors outshot the Steam 14-9 after Summerland couldn’t get the early goal, but the first period would show no score as Summerland’s Eric Scherger would shut the door.

Scherger was Summerland’s best player on Friday night against Kamloops, and did everything he could possibly do to keep a floundering Steam squad in a tightly contested game. The Steam would in fact take a 1-0 lead on Zack Cooper’s 7th of the season early in the second period. Cody Swan collected his first of two assists on the night as he was able to dance down the left side after forcing a turnover and feed a streaking Cooper at the back post for the tap in. Justin Swan recorded the second assist that saw the Steam take the lead.

That lead would disappear in the second period after Hayden Hirsch was able to take advantage of a Summerland turnover. Hirsch collected an errant pass at the Summerland blue line and found himself all alone, beating Eric Scherger high to the glove side for his first of the season in just his third game.

Jason Scheible would then give the Storm their first lead of the night early in the third period, on a shot from the point that found the back of the net despite some serious confusion. While in a standing position, the puck appeared to hit Eric Scherger in the chin of his helmet before appearing in the top part of the net behind him. From our vantage point in the broadcast booth, Scheible’s 5th of the season remains a mystery, but it gave the Storm the lead.

While trying to comeback, Summerland showed a little life. They began to work the puck around the  offensive zone, and took advantage of some zone time on a power play to finally solve Ethan Paulin-Hatch for a second time. It was Linden Gove who did the solving, notching his 18th of the season at the tail end of a power play to tie the game at two. Cody Swan would draw another primary assist on the play, while Morey Babakaiff added the second assist. It did not register as a power play goal, although it came with a man-advantage of a Storm player in neutral ice after exiting the penalty box.

It looked like the hockey game was destined for overtime, as both teams traded innocuous scoring chances in the five minutes following Summerland’s tying goal. Unfortunately, the discipline (or lack thereof) of the Summerland Steam once again bit them in the behind. A pair of penalties in the final seven minutes of play allowed the Storm to ramp up the pressure and finally break through with 2:16 on the clock, as a power play goal from Chris Thon broke the tie. Thon’s 11th of the season came as he found a loose puck to the right of Eric Scherger and deposited it into the top of the net. Brandon Mucha would then add an empty net goal to seal the 4-2 victory for Kamloops.

“It’s frustrating,” Said Head Coach John Depourcq in his coaches comments prior to Saturday’s game, “We get off to a good start, I thought the first few minutes we did well enough to score two or three goals and then it just sort of went downhill from there. We were able to get the first goal but we made a lot of mistakes, and we took a lot of bad penalties. We took six and four of them were in the offensive zone and that tells you a little bit of the story. Those are lazy penalties, not the smartest ones to take and it’s frustrating that they cost us in a game that we should have won.”

All in all, Friday night wasn’t a banner night for a Summerland Steam club missing several key bodies including Mitch Gove, Lane French, Kaden Moravek, and Dawson Jenner. To make matters worse, Everett Scherger picked up a hit to the head penalty in Friday night’s game, and a subsequent suspension for the third instance. He missed Saturday night’s game, and will miss a key tilt this coming Friday against the Kelowna Chiefs as part of that suspension.

“Whenever you lose your captain it’s tough,” Said Depoucq ahead of Saturday’s game, “It’s a bit of a tough call in the sense that Everett’s working hard, which is what you ask from all the kids, to be physical and be aggressive. He went to hit the guy and he buckled and hunched over, and it’s called a hit to the head. They’re trying to minimize those, obviously, and it’s a bit of a tough call on him but we lose him for a couple games here.”

The suspension to Scherger, as well as a minor injury to Brett Wilson forced Mitch Gove back into the lineup on Saturday night. Gove has been battling a flu bug as of late, and missed both Showcase games as well as Friday night’s battle with the Storm. With the low number of bodies up front, Gove was asked by Head Coach John Depourcq to give what he could on Saturday night, and he wasted no time making his presence felt.

He opened the scoring for the Steam just :36 seconds into Saturday night’s contest against the Sicamous Eagles, blistering a shot over the glove of Eagles’ goaltender Cole Steinke. Gove’s 12th of the season was assisted by Cory Loring and Cody Swan, the latter extending his point streak to six games with three assists in the contest. It looked from our vantage point as if the goal should have gone unassisted, as a Sicamous defender coughed the puck up in front of the goal where Gove teed it up and made no mistake.

Swan’s been Summerland’s best player lately, recording 12 points (5g, 7a) on his current six game point streak. He’s also recorded points in all but one game since November 9th, amassing 9 goals and 24 points in 14 games in that span.

He was at it again on Saturday night, as he was in on all three Summerland goals.

The Gove goal was the only one of the first period on Saturday night, and Summerland was able to add in the second courtesy of Morey Babakaiff. Babakaiff took a pass from Brody Conroy in neutral ice, moved it to Cody Swan who beat a defender down the right wing side to create a 2-on-1. Babakaiff was the beneficiary of a beautiful backhand pass from Swan, and he made no mistake for his 13th of the season.

Once up 2-0, Summerland seemed to engage the cruise control once again, and allowed the Eagles to score three times in 3:29 as Sebastien Archambeault, Colby Sherlock, and Jacob Chafe all scored to suddenly give the Eagles a 3-2 lead. The one bad five-minute stretch for Summerland put them on the back foot, looking to get the tying goal in the third period to extend the hockey game.

Bevis Chou would chime in with a power play goal for Summerland in the third period, his first KIJHL goal, that tied the game at 3 and would ultimately force overtime thanks to both goaltenders. Both Jared Breitkreuz and Cole Steinke were very solid in the back half of the third period, resulting in both teams getting a point.

In the overtime period the Steam dominated possession and total shots, but it was Breitkreuz who had the more difficult task. He made three consecutive saves at the right post to keep the game tied at three, and ultimately end in a 3-3 tie.

For the Steam it was a weekend for learning. In both games they got off to good starts and got a little lackadaisical, allowing opponents to gain momentum and claw back into both games. Their discipline also played a part, as they were shorthanded six times in each of the two games and allowed a power play goal in both. The concern isn’t so much the amount of times they found themselves shorthanded, but in the manner they ended up there. Offensive and neutral zone penalties, caused by turnovers or slow legs were the theme of the weekend, and something that the coaching staff will surely try to work on this week during practice.

Expecting a few bodies back in the lineup, Summerland is set to prepare for a monster pair of road games against the best the Okanagan Shuswap Conference has to offer. They travel to Kelowna to face the vaunted Chiefs on Friday, and head to Revelstoke to visit the Doug Birks Division leading Grizzlies on Saturday. Expect Mitch Gove and Lane French back in the lineup, as well as Dawson Jenner who returns from his 2-game suspension for Friday night’s contest. Captain Everett Scherger will sit Friday as part of a suspension, but will be available to Head Coach John Depourcq on Saturday night in Revelstoke.

Both games are available via playfullscreen.com starting at 7pm. Summerland will then play a road contest in Kamloops against the Storm on January 18th before returning home for a bout with the North Okanagan Knights at 7:30pm on the 19th.