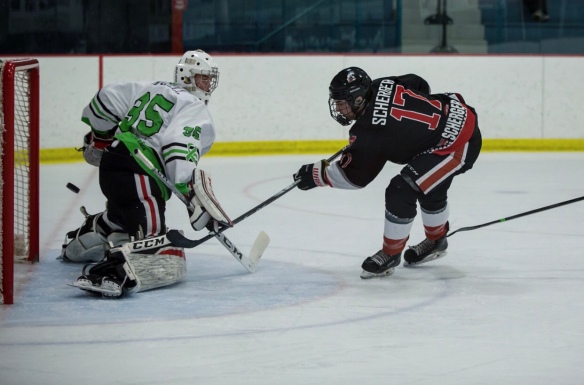 It wasn’t going to last forever, but the Kelowna Chiefs had a pretty impressive run to start the 2018/19 KIJHL season. They’d played 25 games without a regulation loss, and were a perfect 13-0-0-0 record on home ice at Rutland Arena when the Summerland Steam arrived for a contest last Saturday night. Three hours later, that was all changed.

The Steam, 6-3-0-1 in their last ten games, have been playing some of their best hockey recently against the toughest of competition. Saturday was no different, as the Chiefs (obviously) lead the league in not only points, but most if not all offensive and defensive categories. The stretch of games Summerland is coming out of includes games against 100 Mile House, Revelstoke, Kimberley, and Kelowna just to name a few, and the only team not in the top 3 in LEAGUE standings out of those names is the Wranglers, who sit 4th in the Okanagan Shuswap Conference and 10th in the league wide standings.

With their only game of this past weekend being that Saturday night contest in Rutland the Summerland Steam were amped up and ready to go when the puck dropped, but so were the Chiefs. Saturday was the second of four “Mental Health Awareness Games” for the Chiefs, presented by The Peacock Sheridan Group and Mindright.info. Mindright is an initiative started by Chiefs forward Myles Mattila that offers Peer To Peer Support for athletes and young people alike. It’s an initiative that Mattila has garnered national media attention for, and one that the KIJHL has adopted league wide to help lessen the stigma around mental health in not only hockey players, but young individuals in general.

The Chiefs opened the scoring, as they often do, courtesy of Lane Paddison. Paddison potted his 14th of the season off a pass from Chiefs Captain Tyler Love, beating Steam starter Jared Breitkreuz to give the Chiefs a 1-0 lead.

The lead would last just 2:53 for the Chiefs, as Summerland would get on the board thanks to Cody Swan’s 11th of the season. Swan was able to get a stick on a long Cory Loring shot to beat Braeden Mitchell in the Kelowna goal and tie the game at 1.

The Steam would take the lead with 12:24 remaining in the first period as Cairo Rogers chimed in with his 4th of the year. He gave the Steam the lead by snagging a neutral zone pass from the Chiefs and heading in on a breakaway, beating Mitchell high to the blocker side.

Everett Scherger would stretch the lead to 3-1 for the visitors with his 8th of the season just a few minutes later, scoring shorthanded with 6:03 remaining in the first frame. Scherger was again able to intercept a pass from the Kelowna power play as they exited their own zone, and was free and clear towards the Kelowna goal. The Captain went backhand, forehand and was able to beat Mitchell to the blocker side to extend the lead.

Summerland would head to the locker room up a pair, but not before the Chiefs would have a dangerous power play opportunity. The Chiefs power play is among the top units in the league, and they score at an alarming rate. If not for this save from Jared Breitkreuz, the score is 3-2 heading to the first intermission and things are far more interesting:

I won’t steal @KChiefsVoice ‘s highlight thunder from Saturday’s game but this from @SteamKIJHL @jaredbreitkreuz is ‘TSN Turning Point’.

With Steam up 3-1 & @KelownaChiefs on a PP, Breitkreuz slides to stop @KIJHL‘s leading scorer, Brody Dale, from making it a 3-2 game late 1st pic.twitter.com/iTeE6nem4g

The scoring would continue for Summerland in the second period. Linden Gove potted his 17th of the season on the power play just 1:42 in. Gove was the recipient of a pass from Cody Swan across the top seam of the Kelowna penalty kill, and made no mistake beating Braeden Mitchell to put the Steam up 4-1.

Liam McLaren would add another power play goal for the Steam with 9:16 to play in the period, having a Mitch Gove shot direct off him and into the net to make it 5-1. The younger Gove and Cody Swan would each pick up an assist on McLaren’s 9th of the season.

Just 45 seconds later, it was Morey Babakaiff’s turn. After the Chiefs made a foray into offensive territory, McLaren forced a turnover to spring Cairo Rogers down the left wing side. Rogers waited on a Chiefs defender before sliding the puck cross-crease to Babakaiff, who banged home his 10th of the season to push the Steam up 6-1.

There would be no change in the score until early in the third, when Babakaiff scored his 11th of the season on a cross-crease pass from Cory Loring. The third Summerland power play goal of the night rounded out the scoring for the visitors, and pushed them into a commanding 7-1 lead.

Juanre Naude would add one late for the Chiefs after he won a face-off battle in Steam territory. He was able to step through and wire his 10th of the season past Breitkreuz in the Steam goal to close the gap to five for the Chiefs, which was as close as they would come.

Top to bottom, Summerland played their best game of the season last Saturday night in Kelowna, and found a way to beat the best team in the province by a handy margin. They were successful in getting pucks deep into Chiefs’ territory and letting their forecheck do the work, as well as making quick, clean exits from the defensive zone to relieve potential pressure. The Steam also took advantage on the power play, as the Chiefs struggled to keep their composure in a situation they were unfamiliar with.

Making 30 saves, Jared Breitkreuz had likely his most sound game of the season against the Chiefs, making the simple saves he needed to make, controlling his rebounds, and being aggressive at the top of the crease when the time was right. He picked up his 9th win of the season, and is 7-2-1-0 in 11 appearances since October 12th.

Summerland’s veterans have been the ones shouldering the load for the team recently, coming up with big performances when they’re needed the most. Cody Swan (seven games) and Cory Loring (nine games) are both riding point streaks that could stretch to double digits in short order, while Everett Scherger has put up seven points (4g + 3a) in five games since returning from injury on November 16th. Linden Gove has also been hot, scoring eight times and adding an assist in eight games played since November 2nd. His brother Mitch, meanwhile, has averaged a point per game (19 points in 19 games) since joining the Steam in early October.

After a tough stretch of games in November the Steam will play less games in the month of December, suiting up just six times including the showcase on December 28 & 29. They’ll play their only two home games of the month on back to back nights this coming weekend, with the Chase Heat coming to town Friday, and the North Okanagan Knights visiting for the first time this season on Saturday. Friday night is Summerland’s annual ‘Fill the Net’ Food Drive, presented by the Steam, Summerland Minor Hockey and Summerland IGA. Bring non-perishable food items to the game and receive $2 off any regular priced ticket.

The Steam and the Heat have locked up twice already this year and have split the two contests, both held in Chase. Summerland won the first by a 1-0 score, while the Heat were victorious in the second meeting by an 8-3 score. The Heat got off to a slow start in this 2018/19 KIJHL season, but have been starting to get it together lately. Three of their five total wins have come in their past ten games, and they compete hard every night for Head Coach Brad Fox.

The Heat are led offensively by 17-year old Gavin Mattey and 18-year old Breckin Erichuk. Mattey, a hometown boy from Chase, has 13 goals and 20 points in 20 games. All but one of those points have come since October 13th. Erichuk, meanwhile, seems to have found a home with the Heat after starting the season bouncing between Revelstoke and Osoyoos. The 18-year old from Kamloops played two games with the Grizzlies before being traded to the Coyotes, where he played just one contest (against Summerland) before moving on to join the Chase Heat. Since his arrival he’s amassed six goals and 17 points in just 13 games, and seems to be carrying a lot of the offensive weight for the Heat as they try to claw back into the playoff race in the Doug Birks Division.

The Knights, meanwhile, will come to Summerland in a similar situation to the Heat. They got off to a bit of a slow start, but have begun to come on lately after making some changes and getting more competitive. They currently sit 5th in the Okanagan Division and 9th in the 10 team Okanagan Shuswap Conference, and make their first visit of the season to the Summerland Arena on Saturday night.  Summerland has visited North Okanagan twice and has been victorious once, while losing the other contest in overtime.

The Knights are led by second year forwards Jett Saharchuk and Alec McLeod, as well as second year defenseman Cole Haberlack. Saharchuk leads the team in scoring with 31 points, including six goals and 10 points in his last four games. McLeod, meanwhile, will be returning from a suspension on Saturday night after sitting out two games for a Checking From Behind major levied against him on November 24th. The 19-year old McLeod has 14 goals and 30 points this season, setting new career highs in all offensive categories for the Knights.

Likewise, Cole Haberlack is following up a 14 point season in 2017/18 by being near the top of the list of points by defenceman through half the 2018/19 season. He currently sits 2nd in the conference (behind Dylan Kent of the Kelowna Chiefs) and third in the entire league (Evan Gorman – Grand Forks) with eight goals and 24 points in 25 games played. He plays big minutes for the Knights, and surely will be counted upon to contain Summerland’s top line on Saturday night.

Joel and I will be on-air both nights at 7:15 this weekend for pre-game ahead of 7:30pm puck drops. Join us on playfullscreen.com to catch all the action!