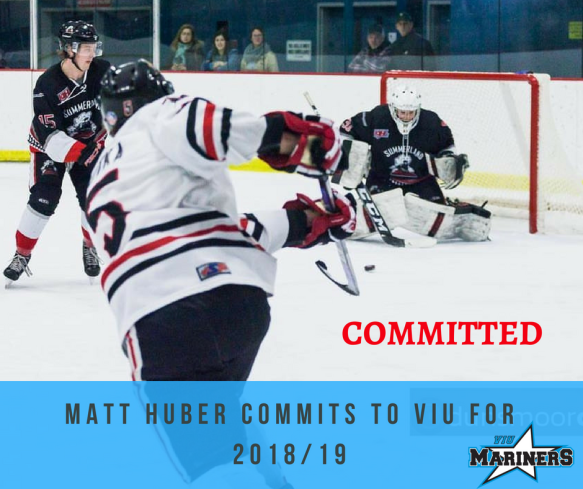 “I enjoyed the past three seasons that I spent with the Summerland Steam,” Huber said in an interview with Steam web correspondent Emanuel Sequira, “Getting the opportunity to play and be a part of the Summerland Steam organization, as well as the community, was an absolute blast.”

Huber left the gates ‘guns blazing’ in his rookie season with the Steam, posting a franchise record 7 shutouts on route to 18 wins in 30 starts. He says it only got better from there.

“Being able to meet new teammates and making buddies that will last a lifetime while having Coach Depourcq and his staff there to assist in pulling everyone and everything together was a big deal and a huge asset for us players,” Huber added, “John is one of those guys that makes everybody around him better, not only as hockey players but as human beings.”

Huber leaves behind a team and an organization that for the first time since it’s inaugural season won’t have the name ‘Huber’ on the back of a goalie jersey in 2018/19.

Matt, of course, followed his brother Brett to Summerland after Brett spent three seasons of his own as a member of the Summerland Steam. Brett also took the BCIHL path, spending the past three seasons with the Selkirk Saints.

The KIJHL, says the younger Huber, is a fantastic spring board into the collegiate levels:

“Making the jump to college hockey from junior will be a different, but enjoyable atmosphere. With the next level comes stronger and more developed players which offers a challenge that I’m willing to accept and run with.

Playing with the Steam and in the KIJHL contributed heavily in helping me achieve this opportunity as my skills, maturity and confidence have been much further developed over the last three seasons.

A new program last year, the VIU program has gone heavy on recruitment from BC’s three Junior B leagues, and boasts at least 8 KIJHL alumni by quick count.

Huber will join former rival Brett Witala, the captain of the Kelowna Chiefs in 2017/18, who also committed to VIU during last season’s KIJHL playoffs. They’ll both be expected to be key cogs in the machine of a program just getting it’s footing in the BCIHL, going 17-8 and finishing third in the six team circuit.

While getting settled playing hockey in 2018/19, Huber will begin studies in the field of Fisheries & Aquaculture, a field of interest for him for many years.

“”I plan on studying fisheries and aquaculture. I like being outdoors, and love fly fishing. I enjoy furthering my education on fish culture and invertebrate. As a kid I’ve always been fascinated with biology and the whole ecosystem that oceans, rivers and lakes have to offer.”

Huber, a native of Calgary, Alberta, chose the island over several US Schools in the ACHA and NCAA Divsion III, simply to stay closer to home, receive education and play hockey in his home country.

“I received offers to play in the States and each school that reached out to me did offer great programs for school and hockey,” Says Huber, “I ended up choosing Vancouver Island University (VIU) because I wanted to go to school and play hockey in Canada. The VIU Mariners also had a great season in their inaugural year and it looked like things were only going uphill from there. I was fortunate enough to tour the VIU campus and arena and furthermore learned about all the good things the school has to offer.”

Huber will set out on a new journey in a new city in 2018/19, something he hasn’t had to do since his arrival in Summerland in September 2015. He had this to say when it comes to moving on from the Summerland Steam to a new adventure:

“I’d like to thank the entire Summerland Steam organization including the coaching staff, billets, volunteers, all the steammates, LFH gym, and everyone involved in helping me reach the next level. Thanks to everyone for helping develop and better my skills on and off the ice and further assisting me in reaching this opportunity to play college hockey.

The last three years of playing Steam hockey have been a pleasure and I would recommend the program to anyone looking for a great junior hockey experience.”

Congratulations to Matt Huber on his commitment to Vancouver Island University for 2018/19! 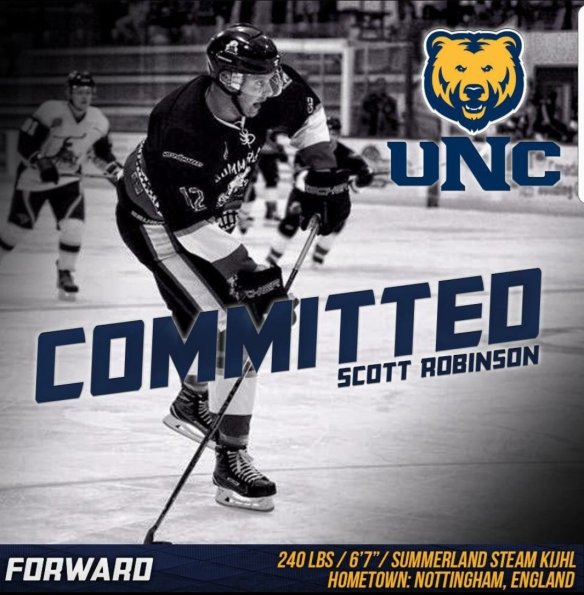 The Summerland Steam Junior Hockey Club is pleased to announce that last year’s leading scorer, Scott Robinson, has committed to the Northern Colorado Bears for 2018/19.

The Bears play ACHA Division II hockey, and are coming off back-to-back Big Mountain Conference Championships in 2016/17 and 2017/18. They finished the 2017-18 season with a record of 23W-9L-1-1 record, finishing 3rd in the West Division and 17th nationally.

Their Head Coach, Kelly Newton, is from the Okanagan and was able to get a pretty good idea of what Robinson has to offer over the last couple of seasons.

“Scott is a huge addition for this program”, He said, “His ability to play forward or defense gives us a lot of options, both in 5v5 and specialty situations such as the power play and 4v4. I watched Scott play multiple times this season, he is a power forward that can bury the puck when he has the opportunity.”

Robinson, a veteran of over 200 KIJHL games including regular season and playoffs, takes the next step in both hockey and education with his commitment to Northern Colorado. He excelled last season in the KIJHL, notching 24 goals and 61 points during the regular season, leading the Steam to a 3rd place finish in the Okanagan Division. Robinson was instrumental in the playoffs as well, and was without a doubt Summerland’s best forward in their 7-game first round series with the Kelowna Chiefs.

In total, Robinson’s KIJHL career saw him play 214 games including regular season and playoffs, tallying 51 goals and 75 assists for 126 points during that time. He spent time with the Osoyoos Coyotes and the Sicamous Eagles, but the bulk of his time and success came in the white, red and black of the Summerland Steam over three seasons.

“It’s been fun,” Said Robinson of his time as a member of the Summerland Steam, “I’d like to say thank you to Coach Depourcq for the past three seasons. He’s the reason juniors have been so much fun for me.”

The 6′ 7″, 240 pound native of Nottingham, England made the conversion from defender to offensive threat in 2017/18, and it paid off with the best year of his junior hockey career. He played dependable minutes in all situations for Head Coach John Depourcq and the Summerland Steam, and was a good teammate and leader throughout.

“We’re very proud of Robo,” Said Depourcq on Robinson’s commitment, “He’s a talented hockey player and a good kid, and we’re happy he’s found an opportunity to continue both his education and hockey career. We, as an organization, wish him all the best as he enters his future with Kelly Newton and the UNC Bears.”

Robinson will join a strong contingent of KIJHL talent who have taken their talents to the ACHA over the years. The ACHA’s Division II Jamestown Jimmies have more than 10 KIJHL alumni on their roster, while others are spread all throughout the ACHA in Division I, II, and III. The University of Northern Colorado is familiar with recruiting from the KIJHL, and have boasted many alumni including former Osoyoos Coyotes Captain Colin Chmelka, who was the Captain of the UNC Men’s Hockey program last season.

The Summerland Steam wish Scott Robinson all the best in his future, and congratulate him on his commitment to the Northern Colorado Bears! All the best, Robo!