Pardon the pun in the post title, but there’s no other way to put it. The Summerland Steam and the Osoyoos Coyotes will do battle on Friday night at the Summerland Arena, and Summerland will be looking to find a way out of the stretch of bad luck against good teams that they’re in. They’ve managed just one win since January 10th, which is unheard of for a franchise who’s lost more than three games in a row on just two occasions in their seven year history.

They’ve been stricken with the injury bug, no doubt, but they’re a better hockey team than the results have shown recently. They haven’t been playing their best hockey, but they’ve been playing good enough hockey to not get beat by scores of 9-3, 11-4 and 9-0 during this stretch where they’ve won just four of their last 11 games (4-5-0-2).

It’s been a story of hot goaltenders and bad luck for the Summerland Steam during this stretch, mixed with their struggles on the power play and getting bodies in front of opposing goaltenders to cause problems. They’ll be looking to get these types of things sorted out, and pointed in the right direction with five games remaining before the playoffs begin on February 23.

That starts tonight, and they better be ready to play, as the Okanagan Division Champion Osoyoos Coyotes pay their fourth and final visit to the Summerland Arena. Summerland hasn’t faired well against the Coyotes this season, winning just one of the previous seven meetings against their rivals from the south. The official line will read 1-4-0-2 in the season series, but it still boils down to six losses in seven tries, which is a big reason the Coyotes ran away with the Okanagan Division for the fourth season in a row.

The Coyotes are healthy, as they always seem to be, and are led by a veteran core group of players including Colin Bell, Carter Shannon, Carter Robinson, Hunter Johnson, and the recently returned Judd Repole. Repole, a 5th year Coyote, missed all of January with injury, and has just recently returned to the Coyotes lineup. He notched 2 assists in his return last Saturday night against the Kelowna Chiefs, a 6-3 Coyotes victory.

Once thought to be the powerhouses of the Okanagan Division, the Coyotes and the Steam have been joined by the upstart Kelowna Chiefs, who’ve gained points in all but that game since the Holiday Break in December. They’re playing their best hockey at the right time of year, and they’ve proven they belong in the conversation when talking about the best teams in the division and the KIJHL as a whole.

That stretch of strong play for the Chiefs has included two rather large victories over the Steam just last week, and closed the gap to make 2nd place and home ice advantage a dogfight with 5 games to go. An 11-4 thrashing last Friday, and a 9-0 drubbing this past Tuesday night, both in Rutland, saw the Chiefs big names feast on an unlucky, and frustrated, Summerland Steam hockey club.

Brody Dale notched 12 points in the two contests, giving him 43 on the season in just 16 games. Brett Witala, who’s been on a hot streak for the ages, extended his point streak to 18 games on Tuesday night with four points, giving him 52 (!!!!!) during that span and 81 on the season. He’s got 15 goals in those 18 games, including six 2-goal games to send him to the top 3 for points (and points per game) in the KIJHL. Witala has vaulted into a battle with Creston Valley Thunder Cats forwards Liam Plunkett and Ronnie Wilkie for the league lead in points, and Witala’s done it in ten less games.

The two teams are locked into the 2/3 matchup in the Okanagan Division Playoffs, which start February 23rd. It remains to be seen who will have home ice, but the two organizations have come together to offer fans on both sides of the series a great deal on tickets.

Being that dates are currently unknown, the Steam and the Chiefs have come together to offer four games, two in each arena, for $30. It gives die hard fans of both teams a reason to travel and watch the first four games of what’s sure to be an entertaining first round playoff series for the fourth straight season. Summerland has won the previous three, but it took six, seven, and seven games, respectively, to get it done.

As for the regular season, which there is still five games left in, Summerland will be looking to shake off the most recent loss on Friday night with the Coyotes in town. The Steam will be looking to start to get back to some of the things that had them so successful early in the year. That was leaning on their veteran defensive core, making clean exits at their blue line, and using their speed on the rush to create opportunities in the offensive zone.

The Steam will lack a little grit tonight, with Liam McLaren and Sammy Gabriel both sitting suspensions for fighting related offenses. Gabriel was banned three games, alongside Kelowna’s Hayden Courtenay for what was classified as a “staged fight” last Friday night.

McLaren, meanwhile, will sit a mandatory one-game suspension for being the second fight on the same stoppage in play on Tuesday night after an altercation with 20-year old Kelowna defender Rhys Colpron.

Add those two absences to the ones already incurred by injury, including Everett Scherger, Ryan Allen and Niall Lawrie, and things get a little thin for Summerland in the numbers department. They could also be without Bailey Tamminga, who at last check was still being evaluated after a nasty instance of unsportsmanlike conduct from Kelowna’s Zach Erhardt on Tuesday night.

After coming together on the end wall and both ending up on the ice, Erhardt was the first to get up. Instead of getting back into the play, Erhardt grabbed Tamminga around the neck and threw him over, the former using his hip as a leverage point.

Tamminga’s legs were stuck under Erhardt at the time, causing the legs to stay put while the rest of Tamminga’s body was thrown over Erhard’t back. Tamminga was in visible pain and had to be helped off the ice by teammates and Steam athletic trainers Josh Dacosta and Josh Jenkinson. There is no word on whether he will be available to Head Coach John Depourcq tonight or not.

If all of these bodies remain sidelined, the Steam will either have to play a short bench or use affiliate players against the Coyotes. This means we could see the Okanagan Hockey Academy’s Kaden Moravek or Bevis Chou again, or Ty Banser, Zackery Cooper or Tristan Hewitt from the South Zone Midget T1 Knights when the Steam take the ice tonight.

Puck drop will go at 7:30 PM on the first of three games for Summerland this weekend. They’ll play at home tonight against Osoyoos, they’ll travel to 100 Mile House tomorrow night for a 7pm start, and then return home for a Monday Matinee on Family Day with the Princeton posse at 2PM. 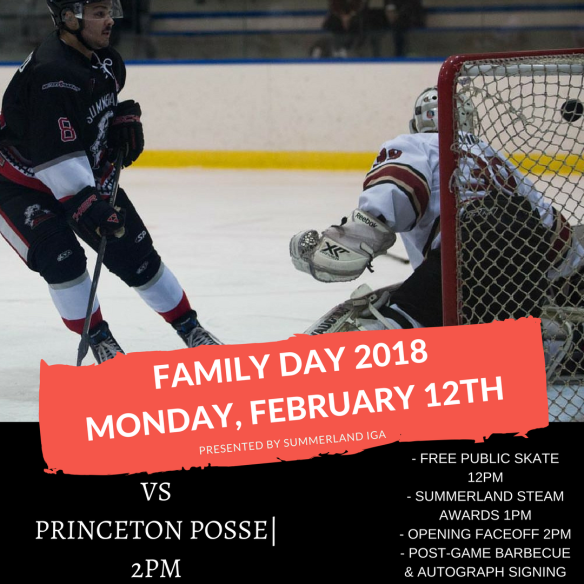 There’s lots happening, so come down and check it out! Family packs are just $20!