This past weekend, the Summerland Steam earned a split in two home games against two tough opponents. Both games saw the Steam come together with local charities to help those in need during the holiday season. On Friday night, Summerland hosted their 3rd Annual ‘Fill The Net’ Food Drive to support the Summerland Food Bank.

They were able to come away with a hard fought 2-0 shutout over the Princeton Posse, thanks to a 23 save performance from goaltender Matt Huber, and also raise a whole bunch of donations for the food bank headed into the holiday season.

Scott Robinson opened the scoring with his 15th of the season just 3:58 into the first frame, locating a rebound off the pad of Posse goaltender Bobby Milligan and sliding it into an empty net. It would be the only goal in the first two periods, which were hotly contested and came with a little bit of fire.

Blake Holowaty would score the only other goal of the game, again off a rebound in the slot, just :29 into the third period. This put Summerland up 2-0 and they let goaltender Matt Huber do the rest. He made 23 saves, including four on either partial or clean cut breakaways, to pick up his 14th win of the season.

Summerland wasn’t great in this hockey game, but they did enough to pick up two points against a divisional opponent. After jumping out of an 0-for-51 slump with a power play goal last Saturday in Princeton, they had just two opportunities on Friday night and didn’t convert on either of them. The bright side though, is that after they allowed Princeton to score three power play goals in their last meeting, they held the Posse to an 0-for-4 on Friday night to help pick up the victory.

On Saturday they faced an equally stiff test in a game that featured the two top teams in the conference, as well as the 1st Annual Teddy Bear Toss at the Summerland Arena. The Revelstoke Grizzlies came to town, and were able to pick up a 3-2 victory thanks to a power play goal by former Kelowna Chiefs defenceman Joel Scrimbit early in the third period.

Summerland would open the scoring and send the teddies flying with 1:15 remaining in the first frame. Cody Swan would be the man to tally the first Teddy Bear Toss goal in Steam franchise history, taking a pass while going to the front of the net on the power play and sliding the puck under Grizzlies starter Liam McGarva.

The bears would be collected by Steam players, staff, and Disctrict of Summerland staff and will be delivered to local charities to help families in need over the course of the holiday season.

Swan’s 15th of the season, assisted by Blake Holowaty and Morey Babakaiff, would stake the Steam to a 1-0 lead after a period of play.

Summerland would hold that lead until the 11:38 mark of the second period when Tommy Boedtker, the Grizzlies Captain, was able to sneak in alone and beat Matt Huber blocker side to tie the game at 1. Boedtker did great work to receive a beautiful touch pass from recently acquired forward Jordan Robertson, who set up his first of three goals on the night.

Cairo Rogers would put Summerland back out in front with exactly eight minutes remaining in the second period with his seventh of the season just a few minutes later. Brogan Lautard did great work along the right wing boards to win a puck battle and find some space. He then had a look and found a wide open Rogers camped out on the back door, and he made no mistake.

With Summerland leading, the Grizzlies showed some push back. They controlled zone time and were able to test Matt Huber with a half dozen or so shots in the last four minutes of the second period. They were able to connect with 3:10 remaining in the frame, as Cody Flann managed to tip a puck into the top corner of the net while cruising to the back post.

Robertson was again in on the play, as he made the pass to the point that allowed Joel Scrimbit to take the shot. The shot hit a body in front of the goal and fell straight to the back post, where Flann was waiting to tip in his 17th goal of the season.

With the score tied at two, we reached the end of the second period. As we did so, however, Summerland found themselves in some penalty trouble. Summerland was assessed a 4-minute double minor for high-sticking, and on the ensuing power play took another 4-minute penalty for spearing after the Revelstoke power play dove on the puck in the offensive zone. Referee Carson Mintram refused to blow play dead, which forced Steam captain Sam Jones to do SOMETHING  to try and get the puck. He began to dig for it, and was assessed a double minor for spearing for his trouble.

This put the Grizzlies on an extended 5-on-3, for a shade under three minutes, to be exact. Summerland was able to get through to the end of the period, but were bitten early in the third when Joel Scrimbit received a pass from Jordan Robertson. He was able to walk in uncontested and beat Matt Huber, despite Huber’s best efforts.

This would stand as the game winner, as Summerland would push but couldn’t beat McGarva again. They had two marvelous chances in the final five minutes, but he made key saves at big times to pick up the victory.

The Steam got a split on the weekend, and raised donations for great causes at the same time. On Sunday the team, in conjunction with Summerland Minor Hockey, took part in the annual ‘Santa Skate’ at the Summerland Arena. They were able to connect with their fans and enjoy a couple of hours of fun before turning their attention to the practice ice and the Osoyoos Coyotes this coming weekend. 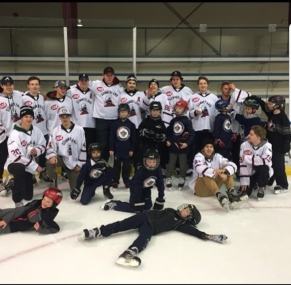 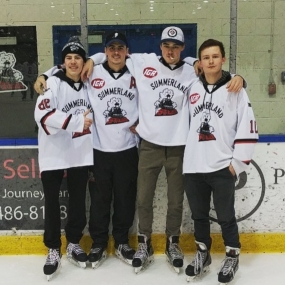 Summerland and Osoyoos are once again out in front of the Okanagan Division. A pair of Coyotes wins in Quesnel, BC this past weekend over the Kamloops Storm, plus a 5-1 drubbing of the Princeton Posse on Wednesday afternoon have pulled them into a tie at the top with 39 points. It should be mentioned that the Coyotes also still have one game in hand.

Summerland and Osoyoos sit nine points clear of the third place Princeton Posse, with Summerland holding one game and Osoyoos two in hand over their foes from the Similkameen Valley.

As always, the Osoyoos Coyotes are the Summerland Steam’s fiercest test. This year the Steam have gone 0-for-3 against their rivals from the south, with two of those games being decided by two goals. Those two were close, and the other was definitely not. Carter Shannon recorded a hat-trick by the 2-minute mark of the second period on October 28th, leading the Coyotes to a 7-3 victory on the road in Summerland.

That was the last time the two teams saw one another, and that will be fresh in the mind of the Summerland Steam when they take the ice at the Sun Bowl on Friday night. So far this season it hasn’t been the Coyotes powerplay that’s caused problems for the Steam, but rather goaltender Daniel Paul. He has been sensational in the two games previous to the 7-3 drubbing on October 28th, so much so in fact that Summerland probably should have won both if not for his performance.

It’s been that way for Daniel Paul throughout his whole KIJHL career, spending the previous two seasons with the North Okanagan Knights. He was able to hold the Knights in enough games to contend for the playoffs at the end of the regular season despite not having a whole ton of offense put forth in front of him.

The 19-year old Kelowna native is doing the same thing now as he was then, putting up a .915% (or better) SV% and making saves that he has absolutely no business making. The difference now, however, is that he has an offense in front of him that scores near the top of the league both at even strength and on special teams. This is why you’re seeing the results you are from the Coyotes, and they only seem to be getting stronger.

Co-Captains and 20-year olds Judd Repole and Colin Bell are leaders both on the score sheet and in the dressing room, leading by example of hard work, longevity and sportsmanship. Both are ‘lifelong Coyotes’, meaning they’ve spent their entire KIJHL careers in the desert. Both hail from Terrace, where the Coyotes seem to get a lot of their talent from, and have been key parts of Coyotes teams for several years.

Repole, who is from Prince Rupert, BC and now in his 5th season, recently played his 200th KIJHL game, and will move into the Top 20 in all-time games played in the KIJHL when he suits up for #202 on Friday against Summerland. He leads the Coyotes in points with 41, and quarterbacks their top power play and penalty kill units while only ever taking a handful of penalties himself.

If Repole plays all 20 games the Coyotes have remaining, he’ll rise to #8 on the all-time games played list with 221, a great accomplishment for a player who’s poured his heart and soul into Coyotes hockey for five straight seasons.

Bell, meanwhile, returned to the Coyotes late this season after spending all summer fighting the fires that ravaged the province of BC. In 15 games since his return in late October, the 20-year old native of Terrace, BC has 10 goals and 25 points. This leads the Coyotes in points per game average at 1.8 points per game, and is on par with his scoring pace from last season where he led the KIJHL in points with upwards of 70 during a 47 game schedule.

These two veterans, along with Cameron Welch, Hunter Johnson, and newly returned defenseman Cody Allen (yes, Steam defenseman Ryan Allen’s older brother) provide a lot for a Coyotes team that is contending for the top spot in the conference. They make up the nucleus of a team that’s talented and tough to play against, much like the Summerland Steam.

These two giants will go to work on one another twice between now and the end of the 2017 calendar, both in the Sun Bowl in Osoyoos on December 15th & 29th. These head-to-head meetings, of which five remain, will go a long way in determining who gets to hang the division championship banner at the end of the season.

Both upcoming games can be watched on PlayFullScreen.com with Tom Shields and Damian Hanna starting at 7:35pm.