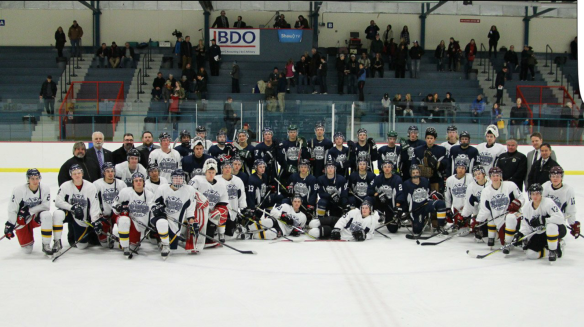 It seems like forever ago we found out that the KIJHL would join with the Kelowna International Major Midget Tournament (KIMMT) to put on the 2017 KIJHL Top Prospects Showcase. For the past couple of months there has been hot debate as to how the game would be formatted, who would be included, how the rosters would look, and how fans league wide could watch the game. What they ultimately decided on was players born in ’99 and ’00, and those players didn’t disappoint on Saturday afternoon on Shaw TV channels throughout the bulk of the province or on YouTube.

From the very beginning the high skill level was on display, and the teams showed themselves well on route to a 3-3 tie. Evan Walls of the Kamloops Storm and Tyler Ghirardosi of the Beaver Valley Nitehawks each scored a pair, and were named Player of the Game for their respective teams. Brady Berger of the Grand Forks Border Bruins scored the other goal for Team Kootenay, while Brendan Mongey of the hometown Kelowna Chiefs scored the other for the Okanagan Shuswap Conference.

Morey Babakaiff was the only player selected from the Summerland Steam for the 2017 Top Prospects Showcase, and had an assist while playing with Kamloops young stars Evan Walls, and Devin Leduc. Walls and Leduc, along with Kamloops teammates Jacob Callas and Garrett Ewart were the stars for Team Okanagan Shuswap, while Beaver Valley’s Tyler Ghirardosi and Bradley Ross were arguably the most impactful players for Team Kootenay.

You can watch the full Shaw TV broadcast on YouTube here:

With the prospects showcase taking place in Kelowna, a lot of teams had light work loads this past weekend in the KIJHL. The Summerland Steam, however, had two big games to play. On Friday night the Steam paid their final visit of the season to the desert to faceoff with the rival Osoyoos Coyotes. The Yukon Line led the way, scoring 3 of Summerland’s 4 goals on route to a 4-3 victory.

Wyatt Gale scored in the game’s first minute to put the Steam up 1-0, and they would go to first intermission with that lead after an extremely well played “road period”. In the second the Steam were at their best as Riley Pettitt scored twice and Ben Dietrich-Scammell added another to extend the lead to 4-0. While they were scoring to extend the lead, they also took their turn putting expert penalty killing on display. Friday was no different than most other times the Steam play the Coyotes in the fact they gave them ample opportunity to cash in on the powerplay. On Friday though, Summerland did a great job to prevent the Coyotes from scoring with the man advantage.

The visitors would take their 4-0 lead to the third period, where they would withstand a Coyotes onslaught and pick up a 4-3 victory.  Hunter Johnson and Ryan Roseboom would pull the Coyotes within two, and Austin Steger would add a third with :47 remaining, but that was as close as the Coyotes would get. Matt Huber was sensational for the Seam in victory, stopping 42 of 45 shots faced.

Saturday night in Armstrong was much different than Friday in Osoyoos.  Summerland didn’t look quite as good as they did on Friday, yet they still dominated from start to finish on the way to a 6-2 victory over the North Okanagan Knights. Everett Scherger scored twice while Matt Alcorn, Andrew York, Mike MacLean, and Ben Dietrich-Scammell also scored. For Alcorn it goes down as his first KIJHL goal, as he was sprung from the penalty box on a pass from Konsta Jaske, he made no mistake in sliding a puck by Knights goaltender Connor Webb. If not for Webb, Saturday night’s contest could have been a lot more lopsided. The young Knights goaltender stopped 33 of 39 shots, including 14 of 18 from inside the “High Quality” scoring triangle.

These two teams will lock up again tonight at the Summerland Arena for the 8th and final time this season. There is still the remainder of a December 2nd game to be played to complete the season series, which will likely be made up as the final game of the regular season near the end of February.

By meeting number eight, these two teams know each other pretty well. That was evident on Saturday night as the physicality was present from the very beginning. That’s going to be the case again Tuesday as both teams have their own goals in mind. The Steam are looking to close the 7 point gap on the Osoyoos Coyotes, while the Knights are looking to get back on track and gain some ground on the Princeton Posse who sit just two points back of the final playoff spot the Knights currently occupy.

Puck drop goes at 7:30 at the Summerland Arena. Joel and I will have the Coastal Eye Clinic pre-game show on playful screen.com starting at 7:15 with coaches audio and a full preview of what’s to come.﻿