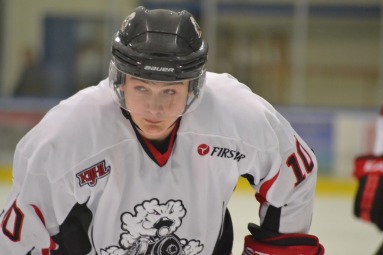 The Summerland Steam announced this morning via their Twitter account that Forward Cole Woodliffe (’97) has rejoined the team for the 2015/16 season. Woodliffe spent last season with the Steam, amassing 22 goals and 26 assists for 48 points in 48 games in the regular season. In the postseason he was Mr. Clutch, scoring game winning goals on back to back Thursday nights in double overtime against Kelowna and triple overtime against Osoyoos.

Woodliffe brings a blend of size, speed and skill to the Steam in 2015/16 that will be more than welcome on a team looking to make a run at a KIJHL Championship. Last season Cole produced at a point per game clip for the Steam, and was counted on in big situations by Head Coach John Depourcq and his staff. I would be led to believe that Cole will be counted on just the same this season coming back from Jr. A camp to rejoin the Steam.

Primarily a center, Woodliffe fits firmly within Summerland’s top six, and could possibly see time on the top line between Jack Mills and Paulsen Lautard. Another potential fit for the kid they call ‘Woody’ would be at center on a line with Braden Eliuk.

Woodliffe is expected to be in the lineup on Friday when the Steam open the home portion of their 52 game schedule against the Osoyoos Coyotes. That game goes at 7:30 at the Summerland Arena, and tickets can be purchased at the door. $10 for adults, $8 for Students/Seniors.